From At the Gates Wiki
Jump to: navigation, search

Make sure to research ways to perpetuate the cultivation of the Resources of the map. But in the beginning you will want to make use of the little resources there are. Don't cry over the lost resources though. Because, for as long as you can move across the map, you will be able to find new resources. Until, of course, you become stuck with a Kingdom and need to use Honor Discipline Clans to secure your borders. 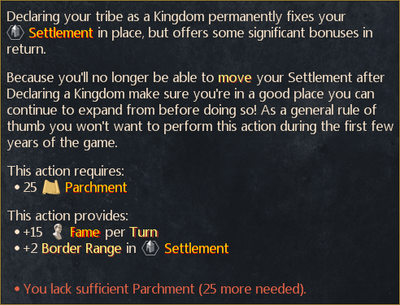 As a final note, though:

The caravan is overpowered for the time being, due to some economic bug. For example, on one playthrough, a player managed to gain 120 sheep in a Ranch. The ranch is ever increasing the flock by 0.9 sheep per turn. Every time the caravan comes, the wool collector of the tribe had made about 100-200 wool. Every piece of wool gives 2 gold pieces, so selling 100 wool gives 200 gold.